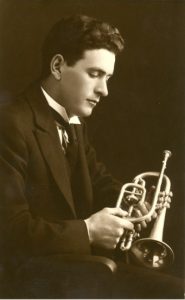 Frank Joseph Henry Wright (born Smeaton, Victoria, 1901; died 16 November 1970), was a composer, music educator, conductor, publisher, and cornet player. He was the conductor of the City of Ballarat Brass Band and Soldiers’ Memorial Brass Band. He was also Australian Cornet Solo Champion. As cornet soloist he went to England in 1933, where he became a member of the famous St. Hilda Brass Band. In 1935 he was appointed director of the London County Council’s Parks Department. In this capacity he organized outdoor concerts, theatre performances, events in London’s parks and was the founder of the open-air symphony concerts at Kenwood Lakeside Park, later in Holland Park and finally in the Crystal Palace Bowl. He was the initiator of the construction of various pavilions and kiosks in the London parks.

From 1935 he was a professor at the Guildhall School of Music and Drama and the Trinity College of Music in London. He was also editor of the magazine The Conductor.

As a composer, he wrote more than 100 works, mostly for military bands and brass bands. The brass band movement in England owes much to his organisational assistance.

The Frank Wright Medal is awarded to a person in recognition for their significant contribution to the Victorian Banding movement. The award is open to banding administrators, musicians, conductors and drum majors. The Victorian Bands League (VBL) is the association of amateur community bands in Victoria, Australia. Its members are those of brass, concert and stage bands who have joined for the benefits that the association gives.
The VBL provides competition, training and representation for its members. Individual members are registered directly with the League to ensure that competitions are as fairly run as possible.

Royal South Street Society will continue to update this notification.