The Herald Sun Aria in partnership with Melbourne Opera

The Herald Sun Aria, established in 1924, is Australia’s oldest and most prestigious prize for emerging classical singers. 2021 sees the Herald Sun Aria enter its 4th year with Melbourne Opera as their official partner.

Widely regarded as the nation’s most prestigious competition for emerging opera singers, the Aria offers nearly $60,000 in cash prizes to enrich the training of our brightest talent. Entries must be aged between 19 – 36 years of age for this wonderful competition.

A night of opera – watch the drama and anticipation unfurl as five finalists compete against each other accompanied by the Melbourne Opera Orchestra under the baton of Greg Hocking.

The finalists will perform two Aria each, giving the audience an insight into various world operas as well as a night of sophisticated exhilaration. Master of Ceremonies, ABC’s Christopher Lawrence, will give a brief synopsis of each Aria. Also performing will music and voice students from the Victorian College of the Arts Secondary School.

With $60,000 in cash prizes available, each finalist will be sure to give an award winning performance, one that will ensure they have the opportunity to go on to perform on the world stage.

Presented by Herald Sun in partnership with Melbourne Opera

Semi finalists that don’t get in the final will receive $200 each. 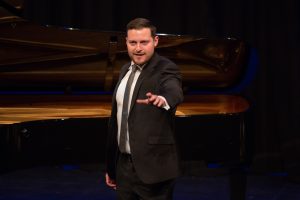 Our office is currently open for restricted hours and reduced staff numbers to comply with our COVID safety plan. Please contact us before arrival via email or phone to ensure staff are present at the office.

Office Hours are: 10 am to 3.30 pm Monday to Friday.  These hours can vary during competitions.

When competitions are in Her Majesty’s you will find us downstairs in Lucky’s Foyer at the Theatre.